We are delighted to announce that our F1 in Schools Team, 'Team Evolve UK' who are reigning English Champions, represented the UK in the World Championships in Abu Dhabi over the last week of November. This high-profile competition backed by F1 saw 55 teams from 24 countries across the world participate. The team faced three tough days of competition across a number of disciplines and were crowned winner, World Champions on Wednesday evening.

The team of 3 is comprised of: George (18 yrs) who is currently on a gap year having completed his A level studies earlier this year, Lewis (17 yrs) and Freddie (18 yrs) who are both in Year 13 at Queen Elizabeth's. As a school, we have participated in the competition for a number of years. This team initially formed 4 years ago, and have evolved to become a trio with Freddie joining in 2017. They came 2nd in the National Finals this year, securing their place to represent the UK in Abu Dhabi. The team have worked extremely hard on designing the car, raising sponsorship, redesigning, testing and racing, on top of the normal demands of A level studies.

The team are accompanied by their teacher and Head of the Technology and Art Faculty at Queen Elizabeth’s, Mr Harvey. Mr Harvey has given much of his own time and has supported many students over the years in this competition and has finally realised his dream of seeing a team not just participate at the World Finals but also win the competition and become World Champions.

Team Evolve UK have had to race, making technical presentations, whilst enduring strict scrutineering and organise a pit display as part of the competition. On Wednesday afternoon, the team reached the final of the knock out competition, which is a competition within the main competition, and took on a German team. Lessons were suspended and students filed into the hall to watch the final on a big screen. To our delight, the team won that competition guaranteeing them a trophy to bring home.

The presentation ceremony took place on Wednesday afternoon and 20 other trophies were up for grabs, including, World Champions. As the event unfolded Team Evolve UK won the Enterprise Award, the Knock Out Competition Award, Pit Display Award and 2 of the team, George and Lewis, who had applied for and been shortlisted to join the Unilever Williams Engineering Academy found out they had been successful.

As we got down to the final awards which were announced in reverse order, another team from the UK came third, the German team that we had beaten on the previous day came second, and finally, Team Evolve UK were announced as World Champions. As part of the prize, they gain scholarships to universities, including UCL Mechanical Engineering, City University London and the University of Huddersfield to give them the best possible start as they move forward with their lives.

Additionally, they all gain access to the expertise of the top engineers in the world through the Unilever Williams Engineering Academy. They will also spend the next 4 days in Abu Dhabi and have access to the F1 Paddock at the final grand prix of the season and enjoy a tour of the track at the Yas Marina circuit, riding in the truck that will eventually transport the F1 drivers around the track ahead of the grand prix. They will also have their trophy presented again on the podium at the finish straight on the circuit, which is where the F1 drivers will stand on Sunday.

The students have all taken on individual roles and responsibilities on their journey to becoming world champions.

The competition is an international affair with representatives from all over the world participating. It starts with local competition and builds up to this tremendous global event towards the end of the year. F1 are firmly behind the competition and the 2019 World Finals is supported by Formula 1 and in partnership with Yas Marina Circuit, The Institution of Engineering and Technology (IET), City, University of London, UCL Engineering, Denford Ltd and Autodesk. https://www.f1inschools.com/

It presents fantastic opportunities for the students to gain insight into the world of engineering and potential career opportunities. F1 in Schools promotes engineering and fosters the next generation of emerging talents through the competition. The UK is well known for its engineering talent and so many of the factories associated with the F1 industry are based in England.

“The F1 in Schools competition is widely regarded as the most prestigious and exciting school competition. At Queen Elizabeth’s we have been competing for a number of years with the single ambition of reaching the World Championships. This extraordinary achievement, to not only reach but to win the World Championships is a phenomenal result for our students from Queen Elizabeth’s Grammar School. As a school, we are absolutely thrilled by this fabulous achievement. We have been on the edge of our seats and even delayed the start of one or two lessons over the last few days as the live feed from Abu Dhabi was displayed in the hall and on screens across the school.

“My thanks and congratulations to the outstanding team of George, Lewis and Freddie, we are immensely proud of them, they deserved this achievement as they have worked so hard. They have been incredibly driven and dedicated and the standard of their work is truly exceptional. However, a special thank you must go to Mr Harvey, their enthusiastic and extremely committed teacher, who has seen them through every stage of the competition, supporting and guiding the students in his enthusiastic way. We are very grateful to him for all of his hard work supporting this excellent team.”

Below are the links to the racing that took place over the week.

Scroll forward to 1:37:00 to see the announcement of the team as champions. https://www.youtube.com/watch?v=3aqJPoKi38k

To see the team winning the knock out competition on Wednesday against the German team, please scroll forward to 3:03:00 https://www.youtube.com/watch?v=MEwFl1GcbBQ 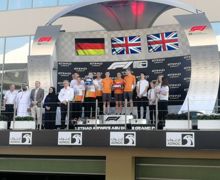 Also in the news

The Department for Education released the official A level league table results on Thursday 24th January. This confirmed that Queen Elizabeth’s Grammar School was rated as the highest performing Grammar School at A Level in the whole of Kent, the highest placed amongst 32 selective schools. The value added score of 0.26 means that students, on average, achieved one quart...
View All News